Dovecote at the Real Science in School Symposium

In February, the Lab_13 Dovecote Management Committee went along to the Real Science in Schools Symposium, which was held at the Council House and was part of the Nottingham Festival of Science and Curiosity.

The Symposium was all about trying to get more pupils from schools across Nottingham involved in real scientific research. There were some really great speakers, Hephzi Tagoe and Becky Parker, talking about all the different ways pupils can be involved. 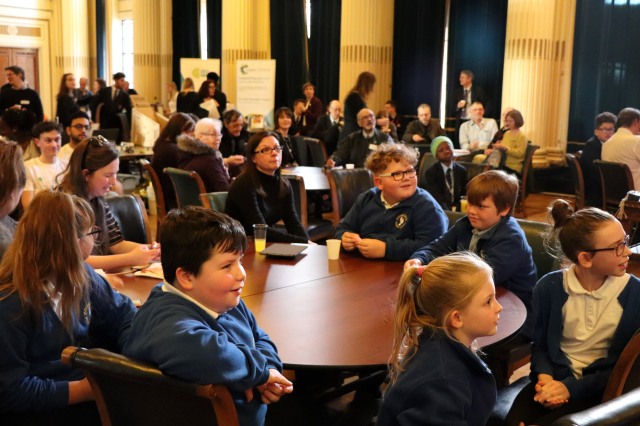 Lab_13 Dovecote went along with Scientist in Residence Bryson Gore to show off the investigations they do and to show their enthusiasm for being able to follow through on their curiosity about science. They demonstrated the multi-coloured slime that they made, which they also sell in little tubs to pupils in the school in order to help pay for the Lab_13! Everyone was really interested in them, and to hear about the kinds of experiments they do, especially because there will be more Lab_13s opening in Nottingham this year.

Lab_13 is a space in a school managed by pupils for pupils to conduct their own research and experiments driven by their curiosity, imagination and enthusiasm, and under the watchful supervision of a Scientist in Residence (not a teacher!!).
View all posts by lab13network →
This entry was posted in Dovecote, Lab13. Bookmark the permalink.