This term we have had some very exciting visitors in the lab! Just after the Easter holidays they first appeared: not doing very much! Miss Draper had adopted some chick eggs. When she got them back to school the eggs had to be warm enough for the chicks to grow inside. In order to stay warm, the eggs were put in an incubator at 37.5 degrees. After 2 weeks, year 5 and 6 candled the eggs to see if they were growing. They candled them by shining a bright light through the shell, so they could see the shadows of anything growing inside. Good news, all 11 eggs were fertile with chicks growing inside! We could see the blood vessels, the shadow of the chick, and some of them were even moving and kicking. 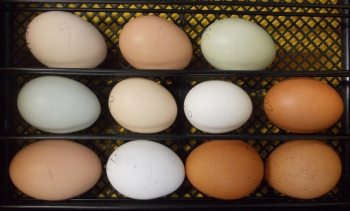 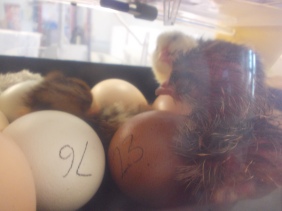 After 3 weeks, surprisingly the first chick hatched overnight.  Miss Draper knew it had hatched because a time lapse camera was placed watching the incubator. Sadly, egg number 9 died in the process of hatching and egg number 6 never developed fully so didn’t hatch.

Each child was able to sponsor an egg if they wanted to, there was a choice of 11 eggs. If you sponsored an egg you could suggest a name for that chick, and if your chick hatched first you won a kinder egg.

Luckily, we now have nine healthy chicks, and we chose names at random from all the suggestions. So now we have new names for the chicks which are, Goliath, Jo Jo, Shaniqua, Daisy, Lucy, Fluffy, Sparkle, Michael and Toffee. Goliath was first, and is suiting his name because he is the biggest! 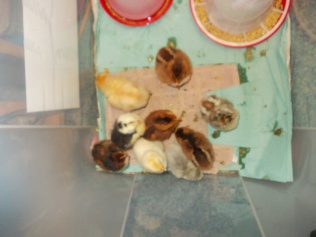 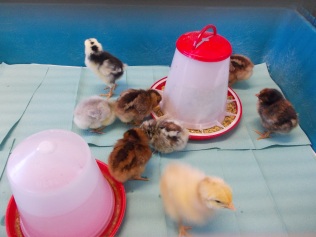 They’re a bit bigger and are in a new cage. We have also weighed them. Here are the results: The heaviest is Goliath: 105g, he is also the oldest. The lightest is Jo-Jo:  67g. The youngest chick is Sparkle, she is also the 3rd heaviest. we couldn’t weigh Daisy as she was too skittish and wouldn’t stay on the scales!

thank’s to a very kind donation from a parent, the chicks now have a lovely big run to stretch their legs in! It has a roof over the top,which is very important as Jo-Jo and Lucy can now use their wings enough to jump out!

We can start to tell whether the chicks are male or female now, as the male cockerels are growing much bigger red combs than the female hens. We think Lucy, Daisy and Jo Jo are cockerels, the other 6 look like hens.  Though it’s still hard to tell, as they are all different breeds. 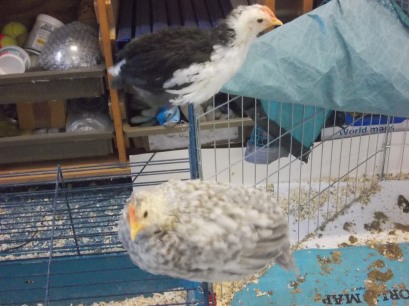 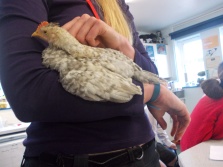 We have had the chicks for 6 weeks and they are ready to go to their new homes. The chicks will have more space, and be able to go outside. They are going to three different homes with family and friends of the school, we hope they really enjoy their new homes!

Lab_13 is a space in a school managed by pupils for pupils to conduct their own research and experiments driven by their curiosity, imagination and enthusiasm, and under the watchful supervision of a Scientist in Residence (not a teacher!!).
View all posts by lab13network →
This entry was posted in Lab13. Bookmark the permalink.